The Middle East is, without doubt, one of our key areas of expertise. We offer three multiclient products, incorporating different elements of the Arabian Plate petroleum geology.   Click on the contact the author button when viewing a report for further information, or contact us here.

The Middle East is, without doubt, one of our key areas of expertise. We offer three multiclient products, incorporating different elements of the Arabian Plate petroleum geology.  Click on the contact the author button when viewing a report for further information, or contact us here.

The Cambridge Carbonates database of palaeogeography maps for the Arabian Plate Foreland Basin have been extensively updated in 2021, with these revised maps available to purchase in pdf format. The palaeogeography maps are based on published data and are produced within the Sharland et al. (2001, 2004) stratigraphic framework. For each 3rd order sequence, a map is available for the MFS, highstand, transgressive and lowstand system tract. In total >440 maps are available from the Precambrian through to the Quaternary.

Maps have been progressively constructed since 1993, using data derived and collated from publicly available sources. A voluminous quantity of information published in the last decade has been integrated.

Our maps are invaluable when evaluating acreage in bid rounds and allow detailed assessment of reservoir – seal – source combinations. The maps also provide our clients with the regional context of their own acreage, which is often critical in exploration and development settings.

The maps can be purchased via credit card for low number (1-10) or via contract for full sets or bespoke sets. 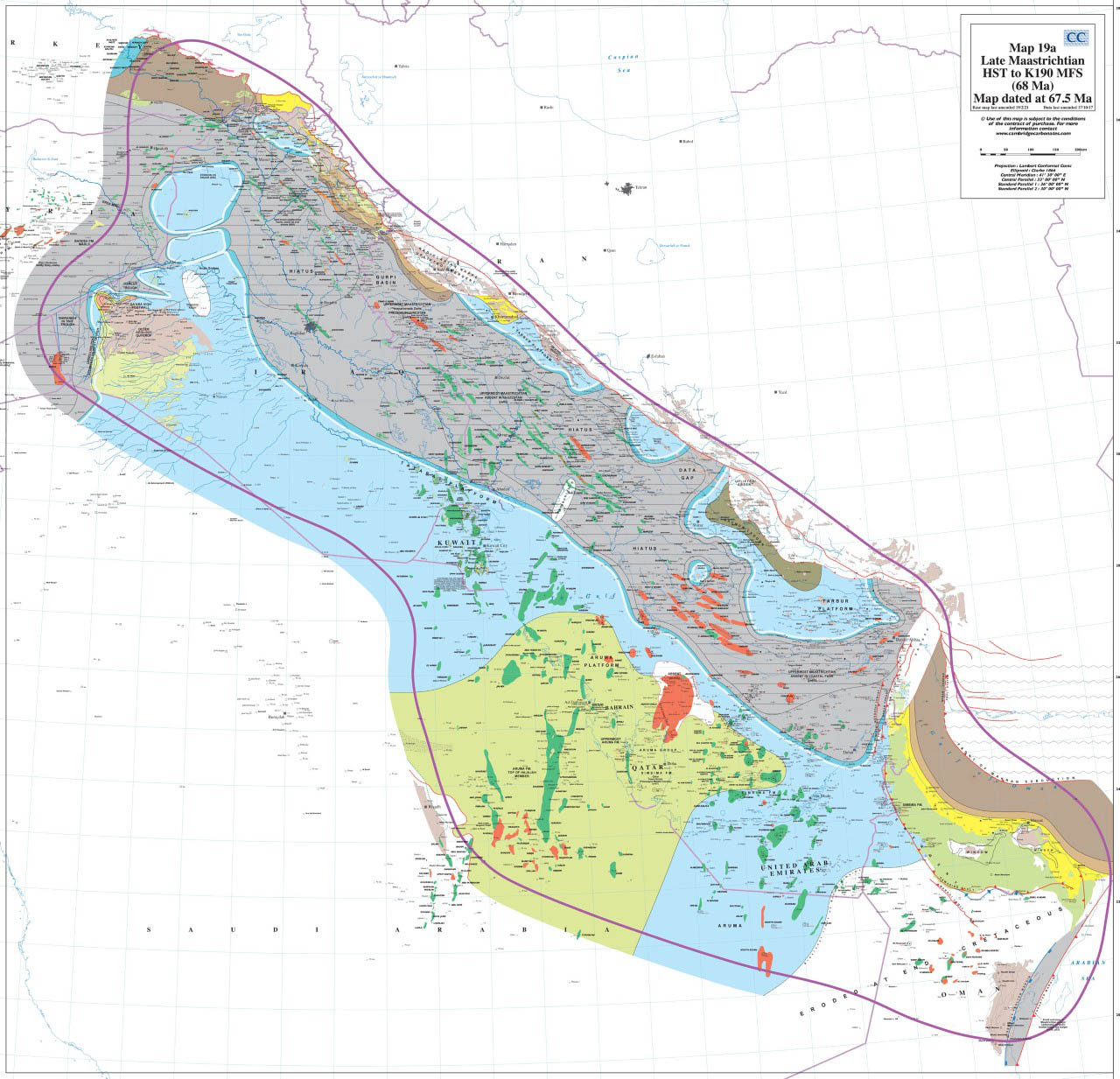 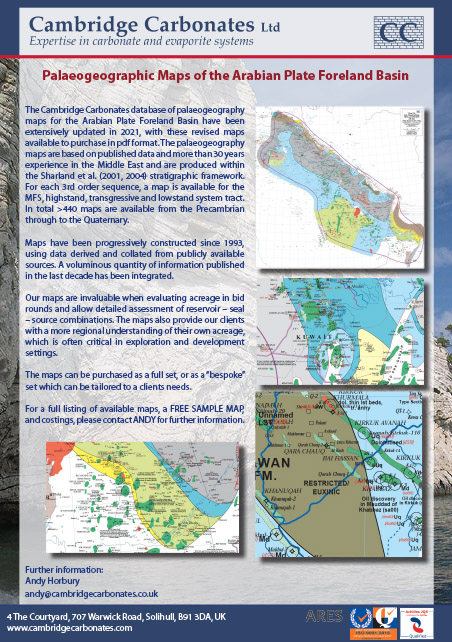 How to select the maps you need
Please view slides … 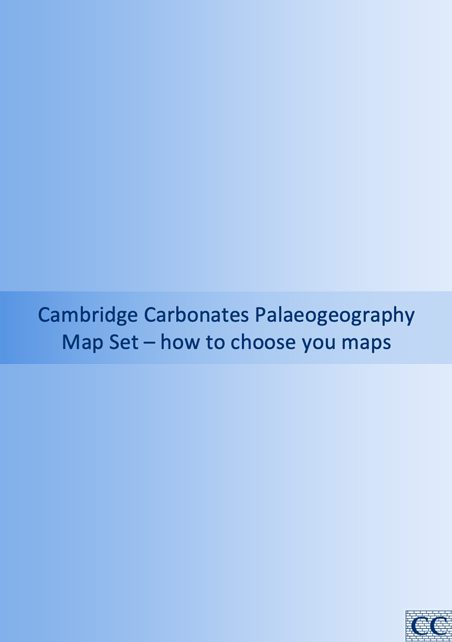 How to choose your Palaeogeography Map Set 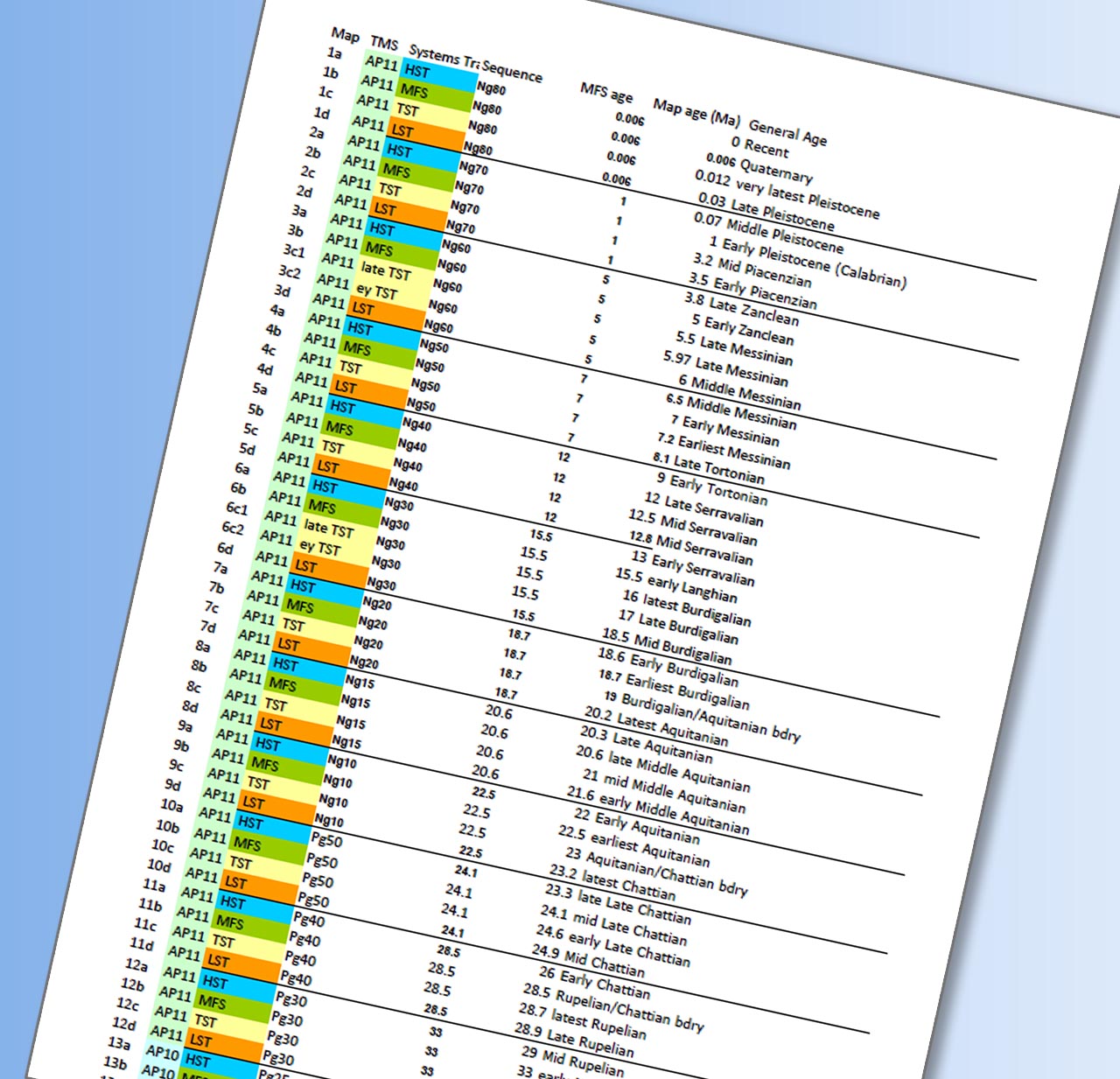 Or view in a flipbook here …

Choose your maps from the listing below

Extensive palaeogeography database for the country of Iraq. Consisting of maps from the Precambrian to Recent, based on the sequence stratigraphic framework of Sharland et al. (2001, 2004).

92 sequences are defined, with a map for each of highstand, transgressive, lowstand and maximum flood systems tracts.

Maps cover the whole of the Phanerozoic using data derived and collated from publicly available sources. In particular, the experience of co-producing the book “Petroleum Geology of Iraq” in 2010 led to acquisition of significant new or obscure data that has now been integrated into these maps.

Facies polygons that are found in the palaeogeographic maps are available as a GIS database that has been developed in ArcGIS.

Preview Palaeogeographic Maps of Iraq
Please click for a sample… 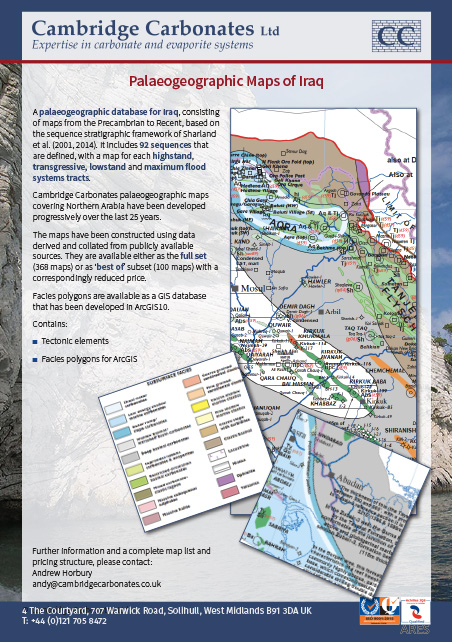 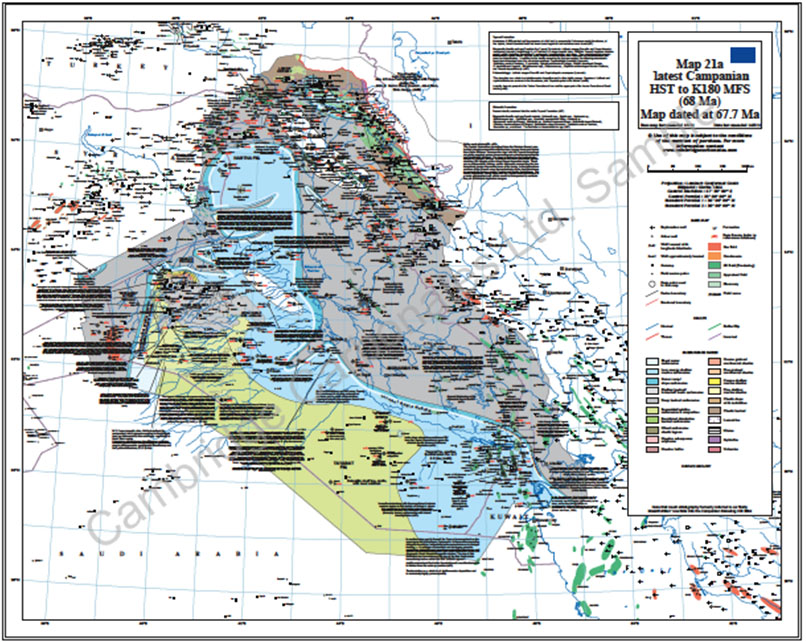 The full set of maps is available, or a “bespoke” set could be tailored to a client’s needs and include key maps for the reservoir, source and seal intervals.

A report on the petroleum geology of Northern Iraq. Interpretation based upon thirty years’ experience in the area and published work.

The report provides an overview of the regional geology (tectonics, stratigraphy, biostratigraphy, facies models). It also presents an analysis of the region’s petroleum geology as a compilation of data in the public realm on reservoirs, source rocks, and seals that is useful for explorationists. As part of this, the main fields in the area and aspects of development and production geology are described in detail. Integration of the regional geology review and the petroleum geological data is provided as a set of play maps based upon the distribution of regional seals above reservoirs. 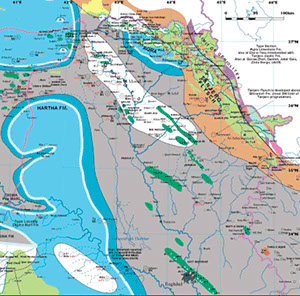 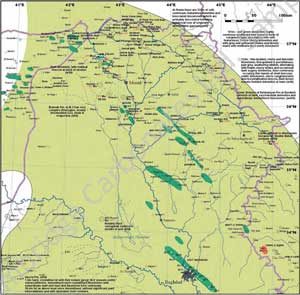 Facies polygons that are found in the palaeogeographic maps are available as a GIS database that has been developed in ArcGIS. 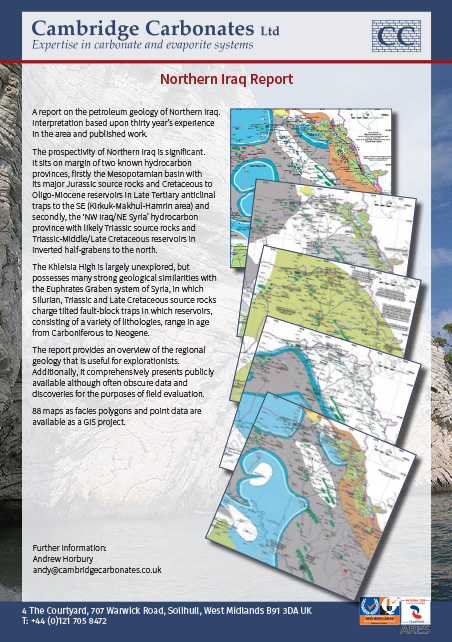 The full set of reports is available, or a “bespoke” set could be tailored to a client’s needs and include key maps.

Page load link
We use cookies on our website to give you the most relevant experience by remembering your preferences and repeat visits. By clicking “Accept All”, you consent to the use of ALL the cookies. However, you may visit "Cookie Settings" to provide a controlled consent. Read More
Cookie SettingsAccept All
Manage consent

This website uses cookies to improve your experience while you navigate through the website. Out of these, the cookies that are categorized as necessary are stored on your browser as they are essential for the working of basic functionalities of the website. We also use third-party cookies that help us analyze and understand how you use this website. These cookies will be stored in your browser only with your consent. You also have the option to opt-out of these cookies. But opting out of some of these cookies may affect your browsing experience.
Necessary Always Enabled
Necessary cookies are absolutely essential for the website to function properly. These cookies ensure basic functionalities and security features of the website, anonymously.
Functional
Functional cookies help to perform certain functionalities like sharing the content of the website on social media platforms, collect feedbacks, and other third-party features.
Performance
Performance cookies are used to understand and analyze the key performance indexes of the website which helps in delivering a better user experience for the visitors.
Analytics
Analytical cookies are used to understand how visitors interact with the website. These cookies help provide information on metrics the number of visitors, bounce rate, traffic source, etc.
Advertisement
Advertisement cookies are used to provide visitors with relevant ads and marketing campaigns. These cookies track visitors across websites and collect information to provide customized ads.
Others
Other uncategorized cookies are those that are being analyzed and have not been classified into a category as yet.
SAVE & ACCEPT
Go to Top